Scale content to fit
The first way is to use your main selection tool to make the frame the correct size that you want, dont worry about the image not moving with the frame just make the frame fit the space you require on the Adobe InDesign page. then we are going to select the frame and look in to our InDesign Control bar at the top of the screen where there is a button that will scale the content of the frame to fit the frame. This will scale proportionally it wont stretch your image at all so you can then use the hotspot to adjust which part of the image is visible in the Adobe InDesign frame. 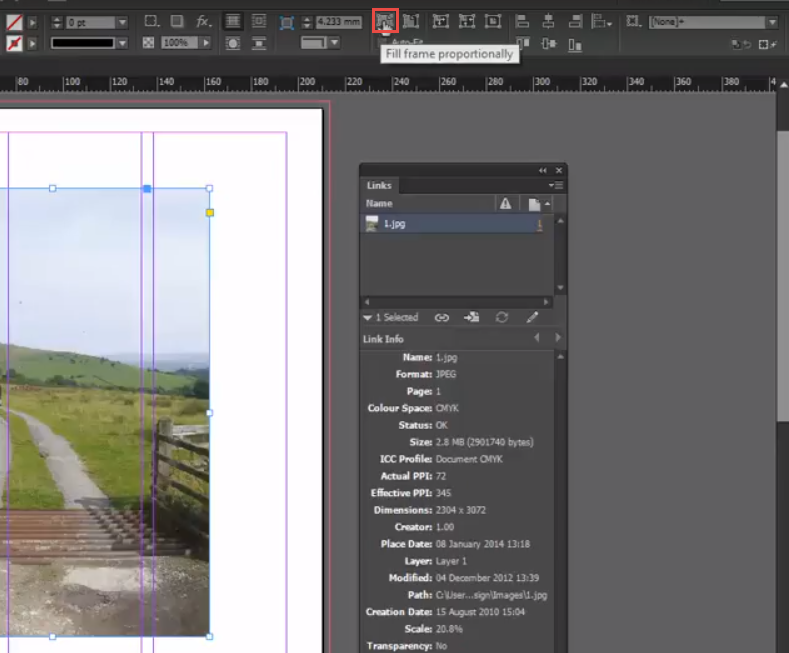 Ctrl & Shift
Ok so this is the best way to have complete control, you can just hold down the Ctrl (Command on Mac) then also hold down the Shift key then simply grab the corner handle on your Adobe InDesign frame and drag it. Both the frame and the image will now be stuck together and you can drag it as big or as small as you like. Be aware to keep an eye on your Links panel (Window>Links) to make sure the resolution doesnt get too low as you make the image bigger.

The reason this is two keys is that if you just hold down the Ctrl key Adobe InDesign will stick the image and the frame together but when you drag you will notice that the image will be going out of proportion and stretching, by holding the Shift key it keepa everything in proportion.

Scale the image and not the frame
There may be instances when the frame is the correct size but you want to essentially zoom in on the image making the image bigger inside the Adobe InDesign frame but keeping the frame the same size. This time we are going to click once on the hotspot in the middle of the image, you will notice a different set of brown handles appear. these are the edge of the image. By grabbing the corner of the brown handles and holding Shift so it keeps in proportion you can drag the image bigger without changing the frame at all on your Adobe InDesign frame..

Autofit
In our Adobe InDesign Control bar there is a small tick box just underneath the button we clicked earlier that Scaled the content to fit. If we select our Adobe InDesign frame the tick this box when we use our main selection tool to grab the handles at the edge of our frame and drag it will automatically stick the frame and the content together and you can scale without pressing any additional keys!
This method works well when you are not making the images a lot bigger or smaller on your Adobe InDesign page and just tweaking around the layout slightly.
Scale Tool
So last but not least we have an actual scale tool in our Adobe InDesign Tool bar, for this one we select the frame we want to scale then click on the scale tool, you can then just drag the corner to make it bigger and smaller. With the Adobe InDesign frame tool you can also click once to change the point you scale from before you drag it.

So there you have 5 different ways to make your images bigger and smaller in Adobe InDesign, have a good practice and you will soon see which ones work better in different circumstances.
[simple-social-share]

6 thoughts on “5 ways to scale images in Adobe InDesign”